Around the island – the vast expanses of the sky and the ocean, complete peace and silence reigns. The one who lives here always listens to something, although he himself does not know what, and involuntarily feels himself on the eve of something even greater, which lies beyond understanding.
Katherine Routledge

Easter Island is a small piece of land.

In the middle of the boundless waters of the Pacific Ocean, in its southeastern part. The area of ​​the island is only about 162.5 sq. km, the distance to the nearest outpost of Eastern Polynesia, Pitcairn Islands, 2000 km, and to the coast of Peru and Northern Chile – 3833 km.

In plan, the island has the shape of an almost regular triangle. On each of its corners there is a large volcano (now inactive), they form a three-headed peak – Easter Island.

The climate is subtropical (the island’s coordinates are 109°25’W and 27°8’S), with sufficient precipitation. Despite this, the flora and fauna of the island is very poor. The volcanic origin of the island explains the presence of a huge number of caves in its depths.

Easter Island is widely known, first of all, for its giant humanoid stone statues. However, this is far from the only mysterious and unique phenomenon on the island. 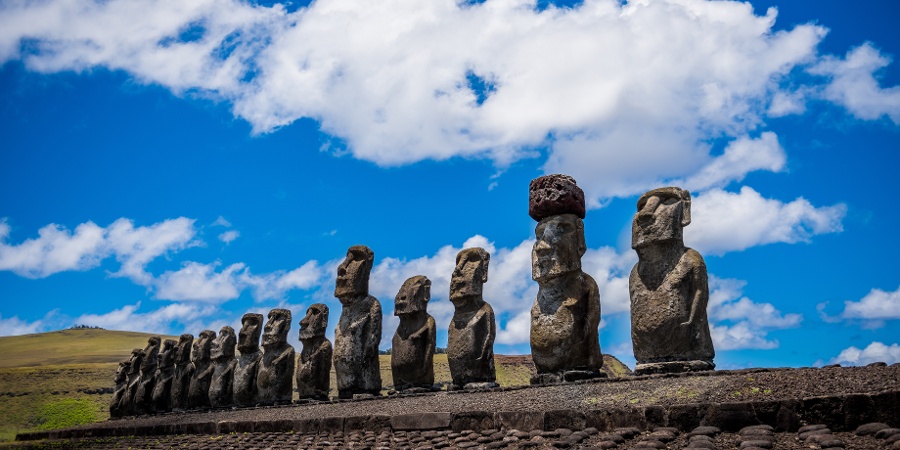 Pre-European hieroglyphic writing, skillfully executed rock carvings and paintings, many diverse, skillfully made, figurines made of stone and smoothly polished wood, patterns of Easter tattoos, powerful religious buildings made of huge stones of various shapes, hewn and fitted to each other with amazing accuracy – this is incomplete a list of evidence of the ancient and rich history of the island.

A small piece of land, lost among the expanses of water, was destined to become the “hero” of even more than one geographical discovery.

The island was first discovered on Easter Sunday Eve in 1722, when Dutch Admiral Jacob Roggeveen stumbled upon it while sailing west from South America.

So, the island was named by Europeans in honor of the Christian holiday, and in different languages ​​its name sounds differently, meaning the same thing – Easter: Easter in English, Pascua in Spanish, etc.

The rediscovery and final “discovery” of the island came almost fifty years later, in 1770, when the viceroy of Peru sent an expedition to sail, ordering them to find and annex the island seen by Roggeveen. The Spaniards, led by Felipe Gonzalez, coped with the task.

By the time European explorers visited the island, the natives of Easter Island had not completely forgotten their history. Attentive researchers have gathered a lot of valuable information from Easter myths and traditions.

So, the Paschals consider themselves descendants of a tribe led by a leader named Hotu Matua. According to legend, Hotu Matua, who lived in the distant land of Marae-rengo, in the Maori region of Khiva, where stone statues stood, was forced to leave his homeland after an internecine war.

Other versions of the legends say that Hotu Matua came from an island that was slowly sinking into the water, so that at high tide it was flooded with water.

The final answer to the question of where the people of Hotu Matua came from still does not exist. On the one hand, there is a legend that mentions that Hotu-Matua sat on the slope of the Rano Kao volcano, in the sacred settlement of Orongo, and looked across the island of Motu-Nui towards his homeland.

Meanwhile, there is no land in the southwestern side of Easter Island. In this regard, assumptions were made that the homeland of Hotu Matua was the land now hidden by the waters of the ocean.

Studies of the Pacific floor, which rejected the possibility of the existence of the hypothetical continent Pacifida in the Pacific Ocean, fully admit the existence in the past of an island or a group of islands that could have gone under water due to volcanic activity.

On the other hand, the rocky island of Sala y Gomez, located to the east of Easter Island, is called Motu Matiro Khiva by the Easter people, which means “an island to sail to the mainland.”

In this case, Khiva, i.e. The Great Land from which Hotu Matua sailed may be South America or New Zealand.

The ancestors of today’s Paschals sailed on two large boats, which, according to different versions, could accommodate from two hundred to four hundred people, their voyage lasted two months.

They brought to the island seeds and sprouts of plants that occupied an important place in their lives: yams, coconut, sweet potato, toro-miro tree, etc. 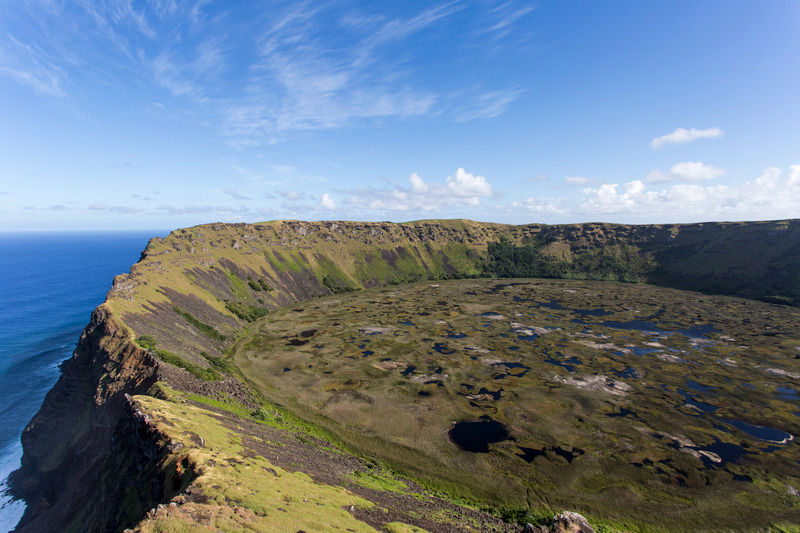 They also brought to the island the famous tablets with inscriptions – kohau rongo-rongo. In total, sixty-seven tablets were brought with texts of allegories, legends, genealogies and sayings related to the country from which they sailed.

The ability to read letters was the privilege of the royal family – the leaders of the six districts into which the island was divided, their sons, as well as some priests or teachers; however, once a year, the entire population gathered and read the text of all the tablets.

The feast of the tablets was considered the most important, and even the war did not cancel it.

Paschal writing, kohau rongo-rongo, has attracted and still attracts many scientists from different fields of knowledge. No written language has been discovered on any of the many other islands in Polynesia, and the search for related writing in other cultures raises more questions than it answers.

According to the principles of graphics, the writing of kohau rongo-rongo is closest to Egyptian hieroglyphics, according to the material of writing – wood – to the writings of the ancient inhabitants of Asia Minor.

According to the direction of writing – the so-called inverted bustraphedon (one line is read from right to left, the next from left to right, etc. , with each next line turned upside down with respect to the previous one) – to the ancient pre-Inca writing that existed in the Andes region.

Two notable features distinguish Easter Island from all other islands in the Pacific Hemisphere: a unique geographical position and rare archaeological sites. Can this combination of geographical and archaeological uniqueness be considered accidental?