The Atlantic Ocean is rich in its sea spaces and even in ancient times it gave birth to a group of islands originating from volcanoes.

The archipelago includes 21 islands, as well as a number of small rocky islets. The total area of ​​Fernando de Noronha is 26 km, and the island itself occupies approximately 18 km.

The main part of the archipelago is the visible surfaces of mountains that are under water and rock formations.

Nature of the island

Even before the 19th century, the island of Fernando de Noronha was densely hidden by forests. However, they disappeared as soon as the construction of the prison began on the island.

Today, a large area of ​​the island is covered with grasses, wild grapes, shrubs and Atlantic forest. This could not have happened if the authorities had not started work on planting a forest. 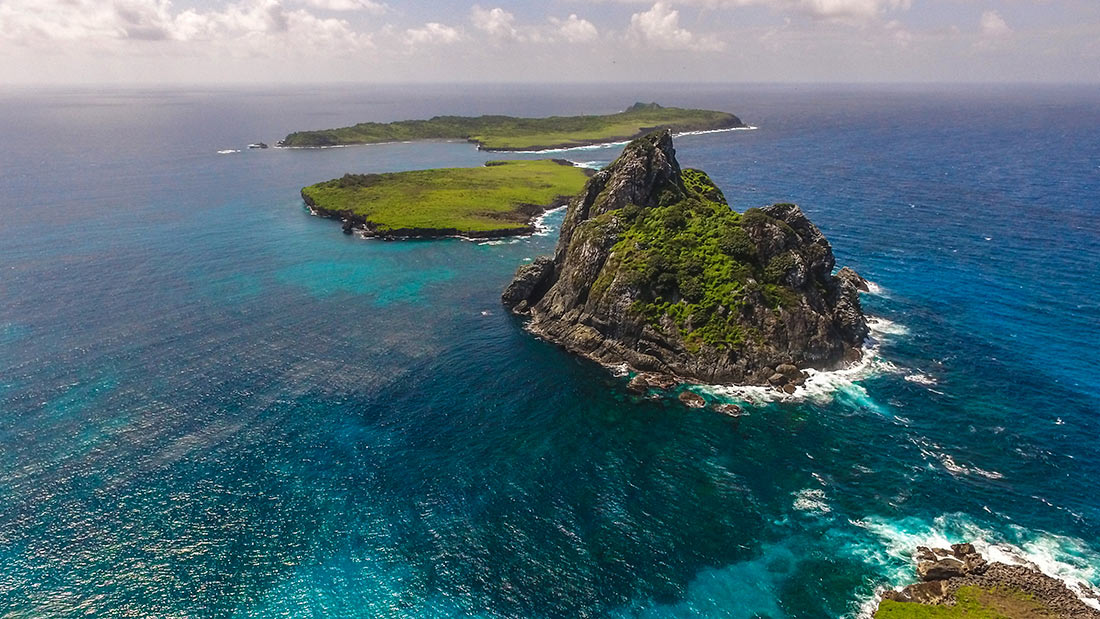 The animal world of the island is represented by dolphins living in coastal waters, as well as sea turtles and birds on land. The latter, by the way, include 2 species of endemic birds: vireon and Noronyan Elinia.

The island of Fernando de Noronha is protected by the Brazilian Environmental Protection Institute. Therefore, no more than 450 tourists are allowed on the island, and each of them is taxed for entry.

The island of Fernando de Noronha is located in the tropics, in which there are only 2 seasons: the season of eternal rains (March-September) and the non-rainy season with a comfortable climate (September-February).

The average annual temperature in Fernando de Noronha is +28°C.

What can be seen on the island of Fernando de Noronha

Fernando de Noronha is surrounded by crystal turquoise waters. The landscapes of the island will take your breath away, and the beaches will not leave anyone indifferent, because it is not for nothing that they have acquired the status of the best beaches in Brazil.

Thanks to its original commitment to the equator, the island of Fernando de Noronha is summer all year round. Due to its remote location from the continent, the island has the romance of a “lost world”. Hostro is surrounded by 17 incredibly beautiful beaches, because here every tourist will find his corner.

Scuba diving is the dream of any tourist.

The optimal time for diving is the period from August to November. Marine fauna will remain fixed in the memory for a long time after the dive – large colonies of seabirds in the entire Western Atlantic, a huge number of dolphins and sea turtles.

The waters surrounding the island are home to approximately 170 molluscs and more than 70 species of crustaceans.

Surfing is another favorite active recreation of island visitors.

In the period from December to May, the waters of the Atlantic Ocean are especially choppy, so all surfers are eager to get to the island. At the same time, surfing championships and sailing regattas are organized on the island every year.

Coastal cruises are especially popular among tourists. You can visit the archipelago by ship. You can get on a cruise ship from October to February.

The main visiting card and pride of the state of Pernambuco can be safely called the Fernando de Noronha archipelago, located in the Atlantic Ocean, 350 km from the northeast coast of Brazil.

Fernando de Noronha was discovered by Amerigo Vespucci in 1503, and in 1737 the Portuguese claimed it as their property. 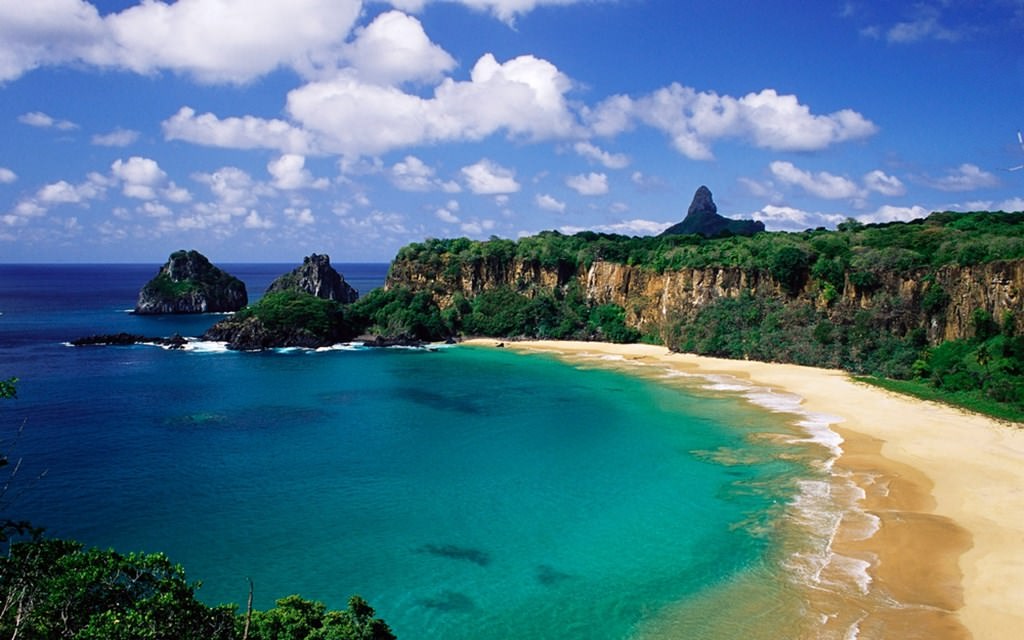 The archipelago of volcanic origin consists of 21 islands and has a unique fauna, for which it was declared a UNESCO World Heritage Site in 2001.

The beaches of Praia do Leai and Baia do Sancha are considered the best of the best in the archipelago itself. And surprisingly clear water, even at great depths, has long turned the archipelago into a Mecca for divers and just snorkelers.

The variety of marine fauna will not leave indifferent even the tourists who have seen the views. Here you can see a variety of fish, sea turtles, sharks, dolphins, lobsters, octopuses.

The beaches of Fernando de Noronha

The main attraction of Fernando de Noronha, of course, are the magnificent beaches that attract tourists like a magnet. There are more than 17 beautiful beaches on the main island of the archipelago.

Praia do Leai and Baia do Sancho are considered the best on the island. The cleanest beaches with amazingly clear water (visibility up to 50 m in depth), they are a true paradise for divers and snorkellers.

More than 200 species of fish, 5 species of sharks, as well as sea turtles and schools of dolphins live here. Sancho Beach is surrounded by a natural rock wall that provides shelter for several species of seabirds.

With good waves and beautiful landscapes, Conceisan Beach is one of the most visited on the island.The “Cacimba do Padre” beach protruding into the sea is ideal for surfing due to its usual strong waves. From here you can clearly see the famous rocks “Two Brothers”.

The sandy beach of Boldro, semi-desert and picturesque, is great for snorkeling. The ruins of the fort of São Pedro do Boldru have been preserved on the beach.

Porcos Bay (Bay of Pigs) is one of the amazing places of Fernando de Noronha. In the central part of the bay there are the famous “Two Brothers” rocks and several picturesque natural reservoirs formed between the island and the reefs.

Another attraction and unforgettable sight is Golfinhos Bay (Dolphin Bay), located behind Sancho Beach, where more than a thousand spotted dolphins (lat. Golfinhos rotadores) gather every morning. There are also many sea turtles that lay their eggs on remote, quiet beaches.