As soon as they don’t call Madeira – “the island of eternal spring”, “pearl in the ocean”, “subtropical paradise” .

And the name of the island was given by its discoverer, whose name is remembered today on the island, Zarku, calling it the simple adjective “Wood”, which is Old Portuguese and sounds like “Madeira”.

Who has not been to Madeira in the centuries since its discovery! The great navigator Christopher Columbus, telling the Spanish Queen Isabella what a small island in the Atlantic Ocean looks like, simply crumpled up a sheet of paper for clarity, depicting the mountainousness of Madeira.

The island of Madeira in Portugal is one of those places that can be said to be Heaven on Earth!

The volcanic rocky oasis, drowning in blooming magnolias, orchids and hydrangeas, washed by the waters of the Atlantic, warmed by the warm Gulf Stream, attracts with its pristine nature and rich culture.

One of the highlights of Fr. Madeira is its rich and diverse vegetation. The warm climate attracts tourists all year round, because excellent conditions have been created here for a relaxing holiday, for sports, SPA procedures, walks along local attractions – levadas or mountain biking.

Madeira blooms all year round (that’s why Madeira is called the “island of eternal spring”) – orange, red, purple, yellow carpets cover the fertile land. Madeira is covered with botanical gardens and green parks like bright and colorful carpets. 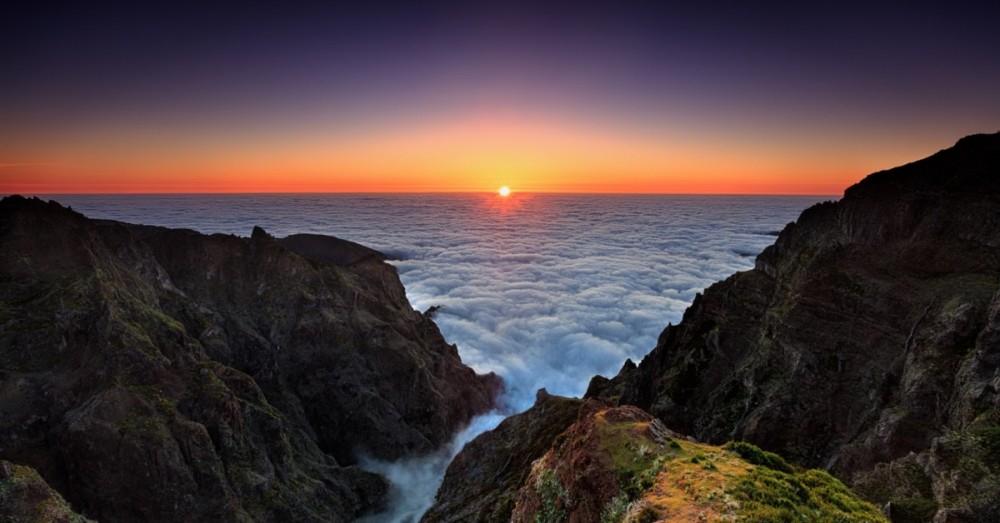 The most visited are the Orchid Garden and the Monte Palace Garden. In addition, Madeira hosts a flower festival. The variety of species and shades delights the guests of the holiday.

The ocean has greatly influenced the way of life in Madeira, it gives tourists the best experience. Here there are opportunities for full-fledged windsurfing, diving, sailing, fishing.

Even in winter, the water in the ocean is heated to 18-19 degrees. The island has coves and pebbly beaches suitable for swimming, and hotels with access to the ocean are equipped with special stairs for descending into the water. Lovers of sandy beaches should go to the town of Calleta or take a ferry to the nearby island of Porto Santo.

These man-made canals are man-made to irrigate fields and gardens with rainwater that accumulates on mountain tops. The first of them were built more than 500 years ago.

In the 80s of the 20th century, a new and extremely useful tradition was born – to take walks on the levadas. Tourists are offered several routes passing through the amazing places of the island.

The basis of local cuisine is, of course, seafood. There are a lot of fish restaurants in Funchal and in other parts of the island, and the fish and seafood there are always very fresh and therefore extremely tasty. Meat is also cooked perfectly here.

For example, eshpetadu is a type of our barbecue: pieces of beef rubbed with salt and garlic, fried on coal. Bananas, cherries, strawberries, peaches, passion fruit and other berries are grown on the island, harvesting several crops a year.

Porto Santo is a nearby island (2 hours away by ferry) that is part of the Portuguese archipelago. It is a giant stretch of sand that forms the basis of the island.

There is nothing here except hotels, the small town of Porto Santo and harsh, after colorful Madeira, nature. It is always quiet and peaceful here.

Small village, east of Funchal. The glory of the town was brought by its inhabitants, who can masterfully weave everything you can think of from willow twigs: picture frames and huge armchairs, bags and lampshades, trays and baskets, beds and cradles, caskets and figurines, candlesticks and planters. 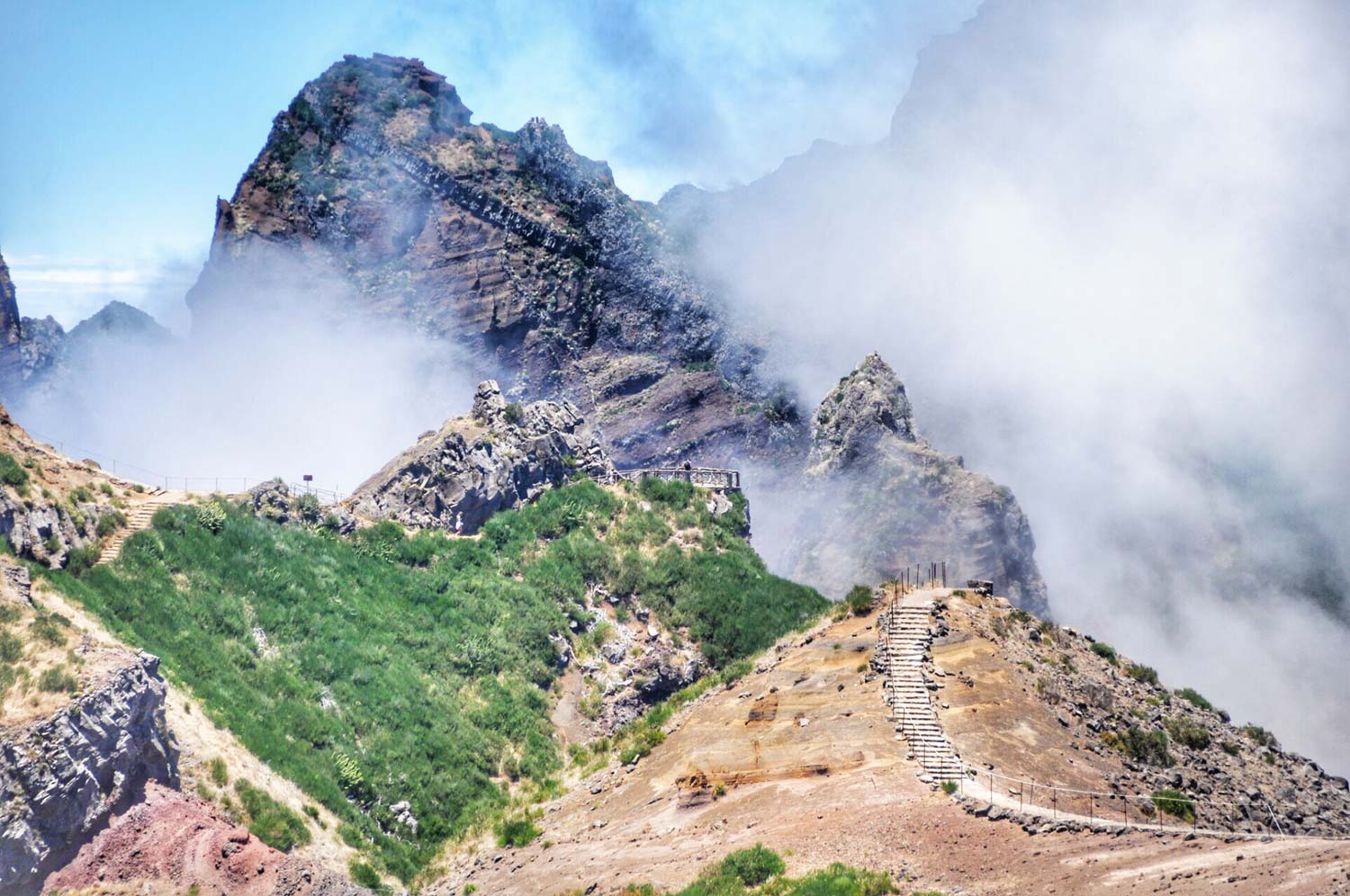 In the “Weaving Center”, which is inevitable with any guide, you can see how all these little things are created. And in the exhibition hall you can see real miracles: the “Noah’s Ark” with animals, the Portuguese caravel with a wicker team and other masterpieces, I will say without exaggeration at all.

And Kamasu is the birthplace of Portuguese football. The first football match took place in the 19th century and made football the national idea of Portugal.

In general, the Maderians first of all say about Kamasha that this is the birthplace of football, and then they remember everything else.

The stadium, where the very first match took place, was in front of the factory, where all this beauty is weaved. Now nothing remains of the stadium, a flower garden has been laid out at this place.

Climbing to this peak is already an adventure, and what an adventure! The monthly supply of adrenaline is consumed through two sharp turns and the body will have to switch to strategic resources.

It’s scary to look around! I mean, it’s terribly interesting. I don’t know how much nerve it takes for those who are circling these roads in tall tourist buses, I probably couldn’t survive that.

But even in a car it was terrifying when the pebbles knocked out of the roadway fell into a bottomless abyss that was not fenced off from the road in any way.

At the most terrible turns, the roadbed tilted at the most incredible angle, trying to throw us down somewhere. No less dashing drivers rushed towards them, who did not at all think of slowing down and showing at least some reasonableness on the road.

At the peak there is an air defense radar station. From whom it protects and who can wish harm to such a good island, it was a mystery to me then, and even now I cannot answer this insidious question.

But it is visible from afar and serves as a signal that the end of the terrible serpentine is near and it will be possible to catch one’s breath and stop the carousel in the head .

Pico do Arieiro is a place for true romantics who are in love with the mountains. Here it is difficult not to be imbued with the harsh beauty of the peaks, and even if the mountains are not yours at all, anyway, it is on Arieiro that you will gasp and be amazed! Because it is very beautiful, just incredibly beautiful!!!

You can climb to the upper platform, to the very edge of the cliff, in order to feel the height to which you climbed.From this rock, you need to look at the clouds differently than everyone is used to.

Here the clouds float underfoot, as you can see them from the plane. And I really want to put my hand in this snow-white fluff, but I can’t reach it .